Everything MAMP you need in one place

MAMP is a very neat and well crafted developing LAMP bundle and comes loaded with options and programs. However, it's free interface is a bit raw.

Mampalon can help you set daemons to any available port, set PHP's module version in Apache's configuration with ease, edit configuration files, start and stop daemons individually, control the Nginx daemon and much more, right from the front end app. 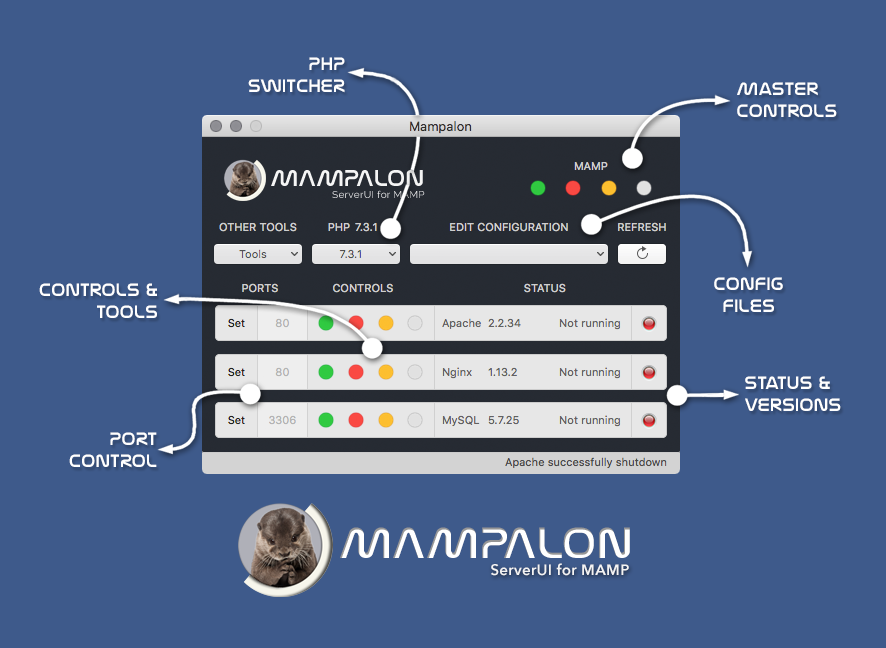 Installing Mampalon is easy, just mount the DMG image and copy Mampalon.app to your /Applications folder.

In order to work properly Mampalon needs to interact with the correct version of MAMP. Because of this it is highly recommended that you move your non-Mampalon /Applications/MAMP folder to another path, or simply rename it.

After doing the step above start Mampalon and it will guide you through the steps necessary to install a fresh and supported version of MAMP that will work with your version of Mampalon.

IF MAMP IS NOT INSTALLED:

Mampalon will detect if MAMP is missing and the Installer Helper app should start promptly.

You can also install MAMP by following these steps:

2) The install-helper will open. Now click on the Install button to install (or reinstall) MAMP.

After Mampalon finishes installing MAMP everything should be functional and you can start using Mampalon to control MAMP.

This area contains main buttons to start, stop and restart Apache and MySQL in one shot. Much like the functionally that the build-in MAMP app has. Also, has a white button that opens the Mampalon web interface (127.0.0.1/ui).

This block of buttons controls the daemons individually. Green starts, orange restarts and red stops the daemon. Plus phpinfo() for web servers and MyPHPAdmin for MySQL.

With this drop down menu you can edit common configuration files for Apache, MysQL, PHP, PHPMyAdmin and SSL. You can also open available logs.

Changes the PHP version of the module loaded into Apache and Nginx.

By accessing the address localhost/ui or 127.0.0.1/ui you'll get an overview of the server's information. Such as loaded Apache modules and PHP extensions, MySQL users and databases, SSL helper, etc. The ServerUI interface also features a nice configuration editor where you can edit and save configuration files. 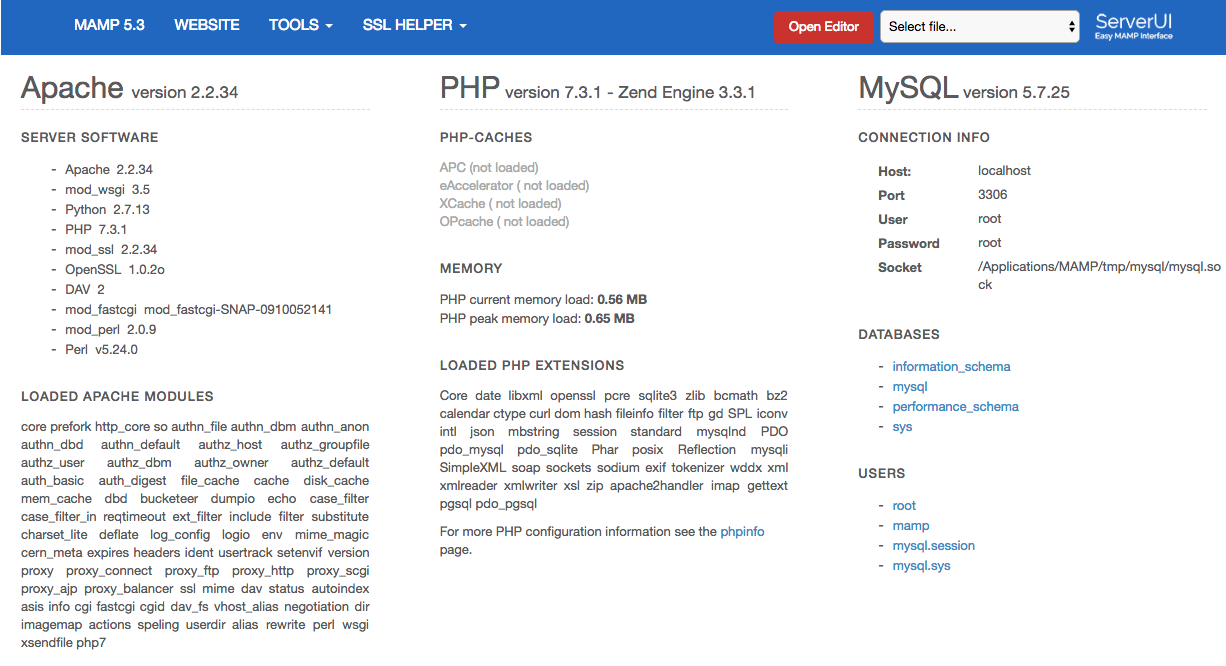 Reset MAMP's and Mampalon's configurations in case something catastrophic happened to these files, such as invalid settings. ;-)

Because Mampalon's sets the htdocs directory to your ~/Desktop none of these options will affect your website's files, such as .html .php .jpg etc. But these actions can affect the databases! Be careful.

These reset options will simply delete all the selected application's configuration files and put fresh ones in place. No backup of the old configuration will be retained!

This option will move the entire MAMP installation to a backup and reinstall everything from scratch.

LAST BUT NOT LEAST

Like MAMP? Consider buying the PRO version. It has a torrent of features. No matter what you are developing it is the most complete choice for professionals. Great software indeed!

Note: Mampalon is provided “as is” without warranty of any kind, either expressed or implied, including, but not limited to, the implied warranties of merchantability, or fitness for a particular purpose.