We can use Apple Script to create a simple menu bar app. What this menu bar app will actually do depends on individual needs. Below you can download a simple example script which has only the minimum code required to create a menu bar app. Download this one if you like to build your menu options from scratch.

You can also get the Controller script and it's support files. But to make everything work some tweaking is required.

This is the minimal script needed to create the menu bar app. You can start with this and mod it accordingly to your needs.

There are only three options/examples in this minimum script: 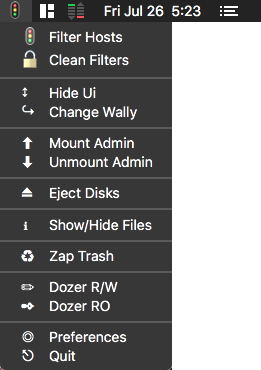 I'll add everything you will need to make this script fully functional, as shown in the image. So if is this you want, let's go!

I'll remove the "Mount/Unmount Admin" options from the script because I believe no one will have use for it. As for the rest of the menu let's make it work!

Simple, just unpack the hosts.zip and move ONLY the hosts.clean and hosts.full files to your /etc directory.

If you like to do the automatic hosts block trick then you'll need to use the hosts file included, which is a bash script file I use to control the whole thing via terminal.

Then make the script executable with: Then execute the script without any flag to get some help: As you can see the command hosts -b will block all bad hosts, and hosts -c will remove the filters and revert to the default.

Finally, we need to edit the cronjob list so this "hosts -b" command will execute every X minutes. To do that set nano as our default terminal editor by opening a terminal and executing this: Now to edit the cronjob list type: Paste the line below in the editor. This tells crontab to execute the "hosts -b" command every 15 minutes of every hour of every day of every month of every year: Don't forget to modify the name of your user in the path above.

To save the cronjob file press CTRL+O and exist the editor with CTRL+X. Now cron will execute this "/Users/My_User/bin/hosts -b" command every 15 minutes, effectively blocking the domains within the hosts.full file. Call me paranoid...

Final Considerations About the Hosts Filter

The reason for this is that the /etc/hosts file is overwritten when you block/unblock these hosts, so you should edit the template file, which is the /etc/hosts.full file and your changes will persist.

We need two things to make this work, one is the wallpaper.scpt script file and the other are the 4 sets of wallpapers, each on its own folder.

So extract the wallpaper.scpt.zip file and move the Wallpaper folder into your user's Pictures folder. You can copy your own wallpapers into these four folders later. For now the three samples inside each folder will do.

Copy the wallpaper.scpt into that /Users/My_User/Bin folder we've created in the hosts setup step, then add the proper cronjob line, just like we did before. So type: And paste the following after the hosts line we've added earlier: Again, change the My_User word with your user's correct path, and save the cronjob file with CTRL+O, exit nano with CTRL+X.

This will execute the script that changes the wallpaper every 8 minutes.

Before we save the script as an application we need to edit it with Script Editor and modify some variables. So double-click the Controller.scpt file to open it and change the following:

So locate the following block: For the first two lines that logic would be:
if h(current time) is bigger than 8(am) and smaller than 12(noon) then
set timeNow to morning

Fix the other lines of this block as well, and try no to overlap times, in other words, where one time ends the other should begin. And at the end where dawn finishes is where morning should start, in the above block that is 8.

If you do not have a Bootcamp partition or just want to remove the Bootcamp options from the menu then skip to step 4, Removing Bootcamp Code.

Now, if you have a Bootcamp partition (Windows installed) do the steps below.

If you want to prevent the Windows partition from auto mounting at boot you need to find out the UUID of the partition and then edit the /etc/fstab file.

To find out the UUID of your Windows partition type the command below, but change the node disk0s4, to match that of your Windows' partition. The result should be something like this: The 93F7F42E-B9B0-4AAB-8DD5-3A64B5CBBBDD is the UUID. Now edit the /etc/fstab file with nano by typing: And add the line below to the end of the file. Edit the UUID to match yours: That's it! Now save it with CTRL+O and exit nano with CTRL+X. Next time you boot your Mac the Windows partition will not auto-mount. You can mount it using the script's menu, by using Disk Utility or by using the good and old mount terminal command.

If you do not have a Bootcamp to control (or simply don't care to control it in this manner) then the code that controls a Bootcamp partition is useless! But we can remove it.

Starting from the beginning of the file, find the set menuList to line and remove this from it: Note that I can't paste the emoji here, so remove everything from that "", to the RO",.

Remove also all these blocks below:

This is the final step before saving the script as an application. And whatever the name you plan to use for the app is what you need to change in this line. Mine is called Controller.app, so if you use this name there is no need to change anything. Otherwise, set the path and app name at the end of this line:

For now save it .app on your Desktop, we will move it to the /Applications folder later.

In File Format choose Application also check the box Stay open after run handler then click on Save. This will save the Application.

Suppressing the Application's Icon From the Dock

There are two ways to do that, manually with a text editor or using Terminal and PlistBuddy.

Let's consider that the .app you've just saved is on the Desktop, and the name of the app is Controller.app. If thats the case, open Terminal and type:

To this: Save the .plist file and close it. that's it!

Now you can move the app to the /Applications folder and run it. You can also set the app to load at login in the System Preferences app under Users & Groups, Login Items tab.

Here is the icon I use for this app. To save it right click the image and choose save image.

To apply it do this:

And here are emojis in case you want to customize the menu's icons. Just remember to change all occurrences of the emoji icon you are changing.