Brew or Homebrew is a package manager. Similar to Gentoo's emerge, or Ubuntu's apt.

What does it do?

Homebrew installs stuff you need that Apple didn’t. Install packages to their own directory and then symlinks their files into /usr/local. Packages are called formulae and repositories are called taps.

To search for a specific package type:

To search keywords only in the package's description:

Or to search both, package names and the description:

Packages change all the time. To make sure the list of packages and their versions is updated run this:

To prevent a specific package from upgrading when you issue a brew upgrade you can "pin" it with:

Or unpin it with:

Usually not needed, but sometime is so... ;)

To link, that is, create symlinks to the package's binaries in the $PATH:

And to unlink the package:

It's an external command for Homebrew that provides a new command, rmtree, that will uninstall that formula, and uninstall any of its dependencies that have no formula left installed that depend on them.

Tap this repository and install via brew itself.

Currently, Homebrew doesn’t have any kind of feature like apt’s autoremove to remove unused dependencies — brew doesn’t make a distinction between packages explicitly installed by the user and those installed as dependencies.

Luckily for all of us Connor Worley has written a script that iterates through all packages that aren’t being depended on and asks if you want to keep or remove them.

It depends on fish shell, so install it first:

You can check the options/flags the install will be done with by issuing this command:

If you need to install the package with different options you can try to edit the config file for it:

Removes any older versions and deletes old downloads from the Homebrew download-cache:

As far as I know there is only one GUI frontend for brew, it's called Cakebrew. You can download it here: https://www.cakebrew.com/ 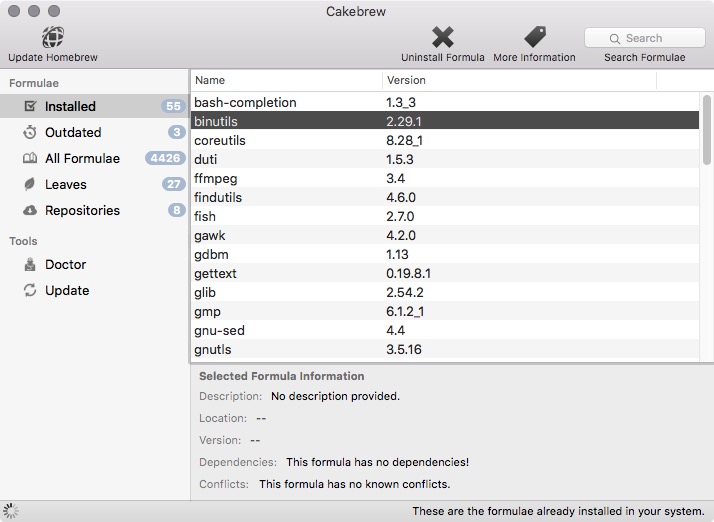